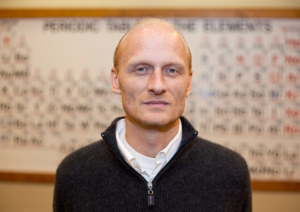 According to Dr. Kramer, pyromellitic diimide is used in electron-transfer systems for its chemical stability as an electron carrier. Because it structurally resembles a reactive imide used in his prior research, Dr. Kramer decided to investigate this supposed stability. Collaborating with researchers at the University of Cologne in Köln, Germany, he found that this hypothesis was correct.

“We were able to isolate and characterize numerous expected products, but also several unexpected structures that indicate the uniqueness of this chromophore. Additionally, the radical anion of pyromellitic diimide, while characterized before, proved to be extremely long-lived under our conditions. We were able to prove that pyromellitic diimide does show reactivity under these conditions,” explains Dr. Kramer, “I have never encountered such a long-lived radical species in my lab. In the classroom, we usually teach that radicals are very reactive and do not exist very long. I was able to put this one in a flask, carry it to another building, and make a measurement there.”

Dr. Kramer says this research would not have been possible without the support of Mississippi INBRE. He explains, “Mississippi INBRE has allowed me to set up my lab with the instrumentation and glassware necessary to conduct research. The research infrastructure in Organic Chemistry and Biochemistry was originally funded by Mississippi INBRE as well. This put us in a position to attract further funding, for example, a Howard Hughes Medical Institute (HHMI) grant. Mississippi INBRE has had and continues to have a major impact on the research in my lab and at Millsaps College.”

Moving forward, Dr. Kramer plans to investigate aromatic imide chromophores further. Will their photochemical reactivity follow the pattern for aromatic imides? Is there a point where structural changes tip the identity of the structure into a completely different reaction pattern? These are the questions Dr. Kramer hopes to find an answer to.

Congratulations to Dr. Kramer and his team. Mississippi INBRE is proud to support predominately undergraduate institution (PUI) research across the state, and this publication is a prime example of its importance. We will continue to report Dr. Kramer’s findings as the research evolves.